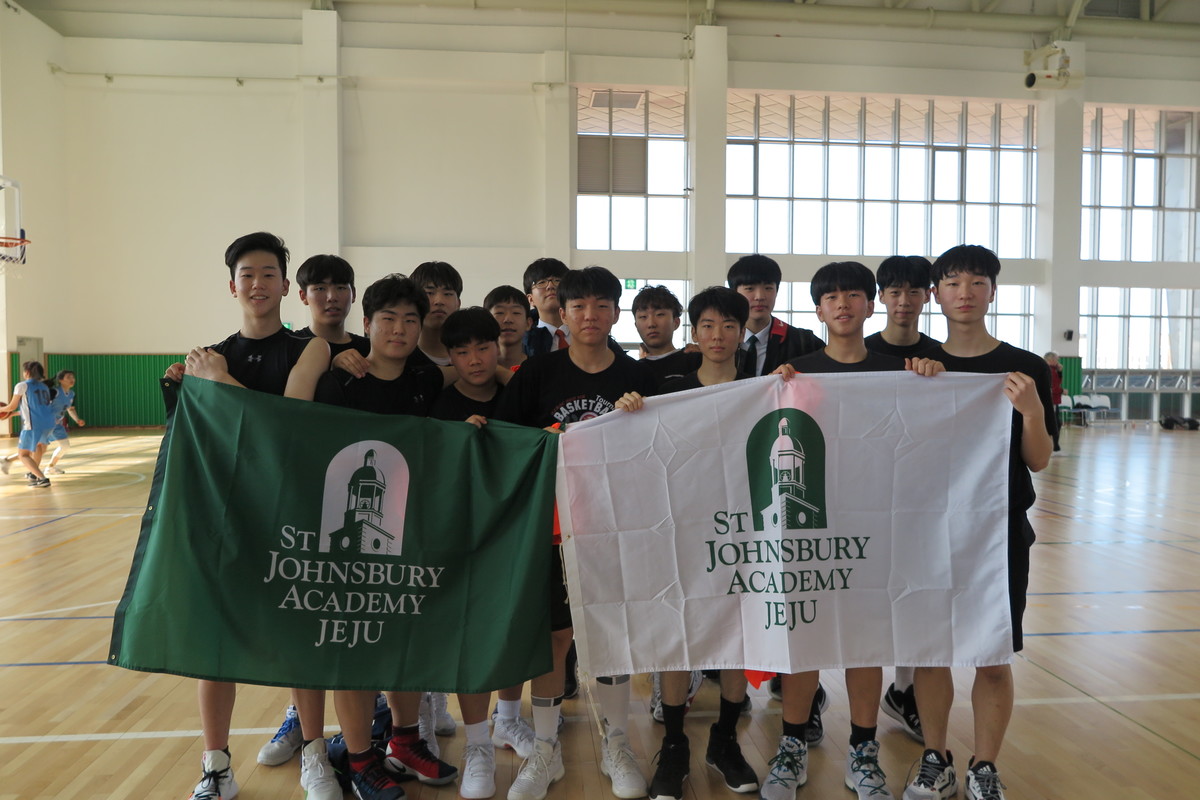 The team was organized and coached by Mr. Jonathan Stein –the Secondary School Psychologist/Counselor- with assistant coaching by Mr. Sean Spiller, Secondary School Physical Education teacher. When asked about the schools' momentous participation in this KISAC tournament, Mr. Stein stated, "It's very exciting to be a part of this tournament and to introduce our athletics program to the league." On Friday, Mr. Kriebel –Head of Secondary School- introduced the basketball team during the morning assembly and announced classes were invited to attend the tournament to cheer on the SJA Jeju team. Mr. Stein further described the students' enthusiasm, stating that "The boys are eager to compete and do their best, and it's really amazing how much support we are getting from the rest of the school and faculty –you really can feel the school spirit."

On the first day of the tournament, SJA Jeju was scheduled for three games. For its debut, SJA Jeju was matched to compete with neighboring school, NLCS Jeju. This first game was a close match with both teams battling it out over the two 12-minute halves. SJA Jeju held the score lead for the majority of the game and was able to secure its first win, with SJA Jeju - 23 vs. NLCS Jeju -18.  The second game of the day was against KISJ, defending tournament champions. Unfortunately, SJA Jeju fell behind in points early in the game and failed to come back with a loss of KISJ -31 vs. SJA Jeju -14.  The third game of the day was against BFS, in which SJA Jeju demonstrated an impressive show of athletic prowess and won by a significant margin of BFS -20 vs. SJA Jeju -31.  Jung Ho Kim (Bill), the team co-captain in Grade 10, was asked about the results of the first day of the tournament. He shared that "Participating in the tournament as a team was great. Even though we were the new team, our teamwork and enthusiasm were really good. So, I feel lots of accomplishment after the first game that we won." Upon the end of the first day of the tournament, SJA Jeju was ranked second place, out of the four boys' B-division teams.

On Saturday, being in 2nd place, SJA Jeju was matched again with BFS (ranked 3rd place), with winners of this game advancing to the B-division championship game.  It was clearly evident from the start of the game that BFS was determined to make up for their previous loss against SJA Jeju. The game was closely matched, with both teams taking and losing the lead up until the final moments of the game. With two seconds left in the game with SJA Jeju down by 1-point, SJA Jeju was unable to surpass BFS's strong defense and make a last ditch effort to score. Final score was BFS -15 vs. SJA Jeju -14.  Although disappointed with their loss, SJA Jeju was able to successfully compete against NLCS Jeju and win third place in the B- division league with an outstanding performance by supporting players coming off the bench (SJA Jeju -23 vs. NLCS Jeju -16).

Mr. Stein commented at the conclusion of tournament play, "This has been a remarkable experience for both the players and the school as a whole. I think it's significant to note that we gave our best, had fun, and did very well for a new team." He added, "Many of these schools have years of team experience that cannot be matched, but that just shows we have a lot of potential as a team and we will come back next year better than ever." When asked about how he felt, 10th grader team co-captain Jae Jung Kim (Randall) stated, "The number of wins does not matter because our team has improved dramatically over such a short period of time, and I am honored to be a part of the outstanding team."

St. Johnsbury Academy Jeju finished in the third place for their first appearance at the 2018 KISAC HS Basketball Tournament, with KIS Jeju maintaining their B-division title.